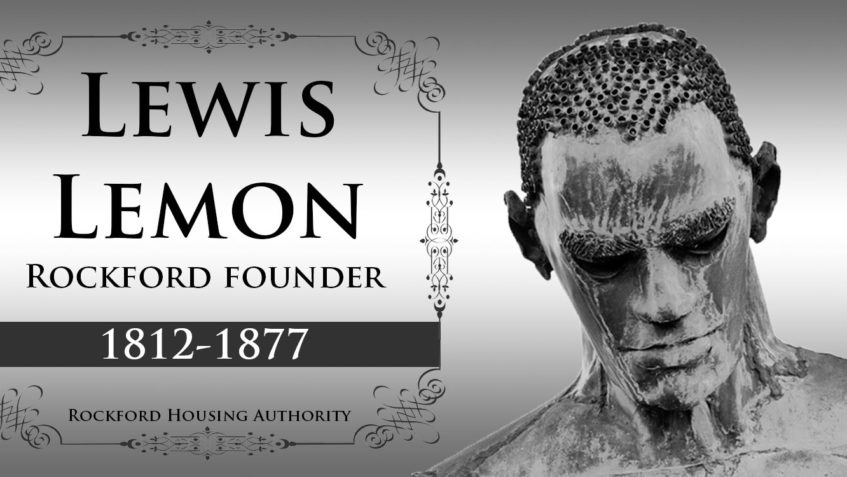 Lewis Lemon: Once a Slave, Forever a Founder

The Start of a Local Hero

This Black History Month the message is about celebrating important black figures and their moments in history, today we talk about one of the founders of Rockford Illinois; Lewis Lemon. Born a slave in North Carolina in the year 1812, like most child slaves, he did not have much hope for his future, but after seventeen years, his life was about to change and his whole destiny as well. Lewis’s master, Orrin D. Lemon moved him to Alabama and there he was selling Lewis “as a slave for life” for about $450. This would equate in today’s money over $13,000. A businessman by the name of Germanicus Kent purchased young Lewis to most likely be a house servant. Lewis Lemon was then known as “Lewis Kent” traditionally taking the last name of the “master.”

The Journey to Rockford

Shortly after purchasing Lewis, Kent’s brother, Rev. Aratus Kent, told Germanicus that Galena, Illinois is a place of “opportunity.” Germanicus Kent then decided to move to Illinois with his family and Lewis Lemon. Arriving in Galena Kent and Lewis met a man by the name Thatcher Blake. Blake and Kent grew into friends and decided to travel the “Rock River Valley” together. In June of 1834, they had left Galena in a wagon and set off to northern Wisconsin.
They reached the Pecatonica River and bought a canoe and traveled the rest of the way on the river. Lewis was traveling with Kent and Blake and most likely doing much of the hard manual labor, like paddling the dugout canoe, considering he was a slave for Kent at that time. The men stopped at a junction with the Pecatonica & Rock Rivers, reaching a small stream that is now known as the “Kent Creek” named after Germanicus Kent; and decided this was the place to live and start his lumber mill. August 24th, 1834, the men began the start of the City of Rockford.

Lewis Lemon and Germanicus Kent had an agreement that Lemon would work for Kent until he until he had paid $800 with a ten percent interest for Lemons freedom. It would take Lemon about 6 years and 2 months to earn enough money to pay for his life back. Kent gave Lewis manumission, the act of one freeing his or her slaves- “a promise that the slave would be obedient and if so, they would get a reward”, for Lewis it was the reward of Freedom. Lewis Lemon was a slave in Rockford IL, from May 1835 to September 1839, making him now a free man.

Lewis Lemon was a free man beginning in September 1839. Shortly after he left the Kent house and met a family named the Kilburn’s, they gave Lewis a starting point as a free man, his home was a little shack on the outskirts of what is now called Kilburn Street, near the plot of land that the Kilburn’s gave to Lewis in 1840, there Lewis grew vegetables for his truck garden and to sell to other Rockford Residents. Part of the Kilburn property is now Paige Park. Lewis Lemon was also a member of the Early Settlers Society. Lewis Lemon passed away in 1877, and the members of the renamed now to Old Settlers Society paid for and held the funeral. Lewis Lemons gravestone is at the now called, Greenwood Cemetery.

Lewis Lemon is now recognized as one of the official three founders of the city of Rockford, later having a local Elementary school share the same name. Additional recognition for Lewis Lemon came to light when an eighth grade class in 1995, from Wilson Middle School, discovered his empty gravesite and placed a gravestone reading “Born a Slave- Died free.” Lewis Lemon was one of the amazing stories lost in history; he conquered so much as an African American man once a slave then, starting over as a free man with barely anything to show. Lewis Lemon worked hard for Kent and for Rockford but, more importantly for his freedom.

This is one of the posts that are part of the Rockford Housing Authority Blog, celebrating Black History month while tying Rockford into these amazing and courageous stories in African American history. Our vision is to help, support and enlighten all people, no matter the difference and achieve success.