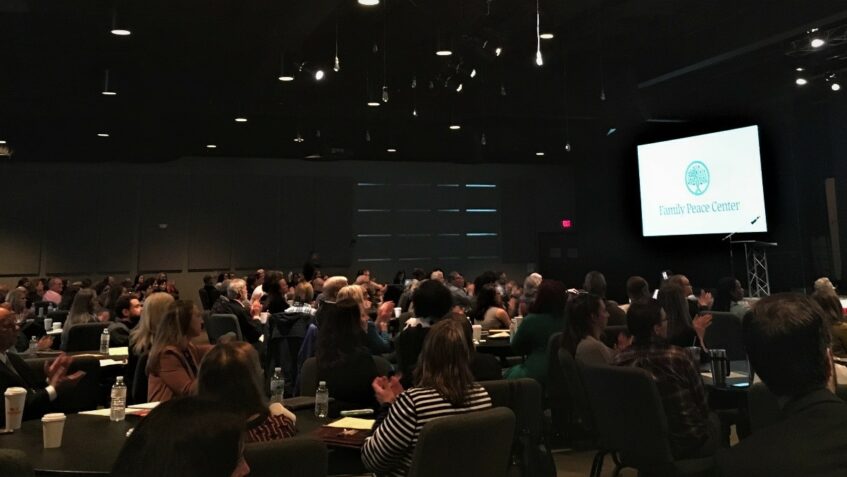 Keeping Our Families Safe And Securing A Safer Community

The Rockford Housing Authority’s leadership team, represented by Owen Carter, Director of Housing Operations and Odessa Walker, Director of Human Services are in attendance as the City of Rockford, Mayor Tom McNamara has announced the name for our new community Family Justice Center; “The Family Peace Center.”

The City of Rockford and Winnebago County are poised to move forward with an exciting community collaborative in the coming months building on the current and collective work of government and community-based agencies and the clear presence of committed leaders.

Today was the first day of a two-day seminar at Heartland Community Church attended by the RHA Board of Commissioners, Chairman Karen Hoffman, Commissioner, Ziyad Shihadah, as well as representatives of law enforcement and social service agencies who are making plans for how the center will operate. A $450,000 federal grant is paying for creation and initial operation of the center, where representatives of at least a dozen help groups would be housed. Private and government grants will be sought to pay for operations beyond 2020.

The Rockford Housing Authority believes that “The Family Peace Center” will create pathways to hope and healing for the victims and their children in our community. “Community members told us that justice looks different to everyone,” explains Jennifer Cacciapaglia, Manager of the Mayor’s Office of Domestic Violence and Human Trafficking Prevention. “Survivors told us the name should be warm and welcoming for both them and their children.”

For the last 17 months, the Mayor’s Office of Domestic Violence and Human Trafficking Prevention has been working to establish one place to serve survivors of domestic and sexual violence.

While the nationally recognized model is called a family justice center, not all facilities use that name. During community sessions and survivor interactions from the very beginning of the process, the consensus was that the name of the Family Justice Center should reflect our community.

The Mayor’s Office on Domestic Violence and Human Trafficking Prevention Domestic violence and the growing presence of commercial human trafficking are threats to public safety and quality of life in our community. The statistics paint a grim picture:

Mayor Tom McNamara spoke in great length about these issues during his campaign in 2016-17 and took action following his election in April 2017.  To learn more about the current conditions, investigate regional and national best practices and propose solutions, he commissioned a report on both issues of domestic violence and human trafficking (DV/HT).  That report was presented to City Council in October 2017, along with the recommendation to establish a Mayor’s Office on Domestic Violence & Human Trafficking Prevention.  The City Council approved that recommendation several weeks later and a search began for an individual to lead the office.

In January 2018, Jennifer Cacciapaglia was hired as manager of the office. She is an experienced attorney, former member of the City Legal Department and a founder of the Rockford Alliance Against Sexual Exploitation (RAASE).  Cacciapaglia is working to coordinate the work of numerous agencies and organizations that touch these issues in the region and bring together resources in a comprehensive manner to better tackle the problems of DV/HT.