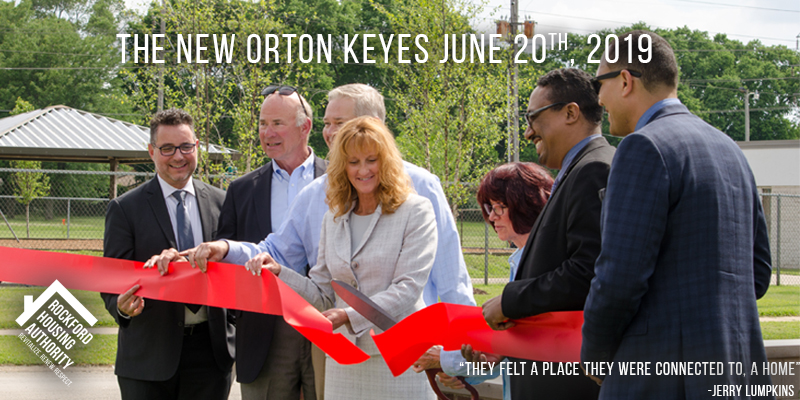 What unifies a city more than the people living in it? The Rockford Housing Authority and Gorman & Company have taken tremendous strides towards Rockford’s longtime goal of unification in the completion of their newest development, the Orton Keyes affordable housing complex. It is located in the south west side of Rockford near the Chicago Rockford International Airport.

Ribbon-cuttings and grand opening ceremonies like this provide the opportunity to reflect on all it took to reach this point. As we reflect on the past, we certainly recognize that we owe a big debt of gratitude to many people who worked so hard over the months to bring this development from the concept stage to where we are today. The Orton Keyes renovation project has taken local subcontractors and Section 3 subcontractors to develop the project to its full potential. The men and women from these unions have worked tirelessly to create a product that they themselves and the City of Rockford can be inspired by. Two hundred and thirty-one pairs of hands offered not only time but supplies as well. The community that came together to achieve significant accomplishment and created not only a tangible product built by teamwork but also a product generations after will be inspired by. The men and women who touched this development created a lifelong connection to their city and community but also displayed their distinction and passion for the future of Rockford.

Economic growth and job development were key components for the development. “It is not about the dollar or the tax credits or the whole complicated work system that the tax people work through, it’s the lives of the people we are working for,” said Gary Gorman.

While the original Orton Keyes was built in 1968 and had not gone under any significant renovation or demolition, Former Board Chair Jerry Lumpkins said: “It still actually has good bones, good

mechanicals and doesn’t need to come down.”  Representatives from Gorman & Company discussed the planned improvements with board members. Central air conditioning, new kitchen appliances, new flooring, and other energy-saving upgrades have been installed in the apartments, and each apartment building is be fitted with a new roof and siding. A building on the ground has been converted to a community laundry facility. Security at Orton Keyes has been improved, also. Residents have key fobs to enter their apartments, and a new security system has been installed featuring 60 video cameras throughout the complex and two cameras near the entrance that are able to read vehicle license plates entering and exiting the development. Lumpkins stated, “It feels safe, it feels clean… there are kids playing basketball and riding bikes.”

The hands it took to build this Union built development encompass the heart in this community. Rockford is on the rise, and the Orton Keys development is only the beginning. The city continues to plan new developmental projects to create jobs and establish safe neighborhoods where families will be able to flourish for years to come. The Rockford Housing Authority and Gorman & Company strive to unify the city with all hands on deck. A community that grows internally is a city that can withstand any adversity.

About the Rockford Housing Authority

The Rockford Housing Authority (RHA) is a municipal corporation established under Chapter 67 1/2 of the Illinois statutes. It is governed by a Board of Commissioners. The Rockford Housing Authority has historically served the housing needs of persons whose income is low and very low in the City of Rockford through HUD funded public and Section 8 housing. RHA has provided “decent, safe, and sanitary” low-income public housing to Rockford’s citizens for decades.

Bridge Rockford Alliance, Inc. (BRaI), 501(C)(3) HUD recognized instrumentality of RHA, was established by resolution of the RHA Board of Commissioners on March 9, 2011. BRAI extends the services and opportunities of a public housing agency. Instrumentalities allow the housing authority to operate more as private organizations and expand opportunities for residents of affordable housing, housing developments and the related supporting activities i.e. health and human services. This broader reach provides BRAI the authority to seek out and enter into new business relationships as a means to support its mission.

The Rockford Housing Authority, alongside Bridge Rockford Alliance, is in transition from a provider of decent safe and sanitary housing to the leading provider of housing that meets a higher community vision.